Yes, just like anyone else's family, mine is no different. Sure it's nice once everyone is together for the first time since last year. But, it's only a matter of moments before one makes a smart comment at another and all chaos breaks loose. Booze begins taking effect, people start yelling, and food starts flying. I wish I were a dog. It'd be a lot easier to clean up that mess with my tongue. Wait, why would I need to be a dog, huh? Yep, what a lovely day.

What the piss-humpin' hell? BUSH WON?! When and HOW did this happen? I really should begin keeping up with my local politics, huh? Pshaw... 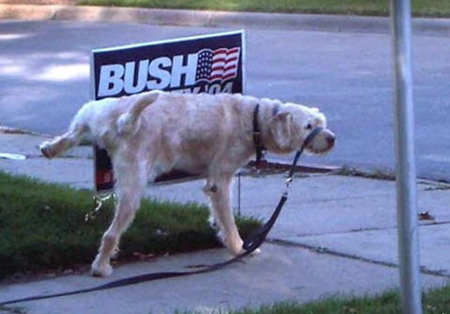 I've infiltrated your little Cowboys of Keyboards site with my ultimate infallibility! I, Dr. J.C. Snopes, Jr., of genuine Snopes lineage, come as representative and Supreme Truism Tutelary for The Church of Furthermost Trueness! Jewish Curt has felt the awful pangs of absolute verity and has since sacrificed his formidable cyber-popularity to a higher cause. Keep your eyes peeled for interesting (and sexy) developments. Enough banter and introduction, though, let's get on with it...

If you haven't heard, and it's just as I predicted, a new species of human has been found on the island of Flores, off Indonesia, and, as I also predicted, scientists have already unfairly dubbed them "Hobbits." Well, when push comes to shove in Operation: Bot Extrication 2268, we'll see who those "Hobbits" still lurking in the dense forests of Africa and South America side with. Their terribly fierce pony-sized elephants and effeminate Rodents of Unusual Size will ravage your unsuspecting and all-too-trusting women. (Just as I predicted.)

Thanks, by the way, for voting for Bush (predicted). John Kerry tied up a woman named Li Chiu in 1964 and kept her for six nights without food or water in a meat locker just to verbally abuse her in the nude and punch his thighs while she wept for her dead son and struggled to get to fresh sandwiches he regularly set just beyond her reach. Plutonium, Uranium, Atomic Fission, bin Laden, punch and pie. You think I'm making things up? Well, please allow me to retort with the following: Say some scientists went to the government and said, "Hey, government, we have invented something that will make everyone's lives significantly easier, but it will cost 40,000 American human deaths per year." Would the government tell them it's not worth it? To shove their invention up their asses? ...we already have this innovation, it's called the automobile.

I predict that you shouldn't feel too safe. Hydrogen bombs literally have the force to split the Earth in half at its widest point.